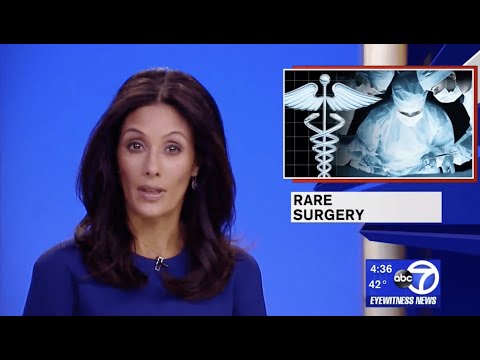 So-called "fat transfer" breast reconstruction after mastectomy is nothing new, but doctors at Northwell Health recently performed a rare type of transfer from an unlikely place.

Stacey Dunn, a 46-year-old from Lindenhurst, was battling breast cancer last year and undergoing chemotherapy and a bi-lateral mastectomy -- not to mention testing positive for the BRCA2 mutation, which increases her risk.

Despite all of this, Dunn was brave enough to endure a type of breast reconstruction surgery at Northwell. It was a transfer of fat to reconstruct her breasts, but not from the typical areas such as the abdomen or thighs.

"Go figure, that the one area I was a little bit self-conscious about, saved me, basically, " she said.

Dunn became the first patient at Northwell to endure a complex procedure in which fat was used from her "love handles" to reconstruct both her breasts in one long surgery.

"You can't just take that tissue and put it up there and expect it to survive," he said. "You literally have to transplant it, just like you would a kidney, a heart, or any other organ."

It means that blood vessels needed to be attached, and the blood vessels are shorter in the lower back area. So extensions from Dunn's armpit area were also used, adding to the complexity.

Still, she says that given her thoughts on implants and her lack of body fat in the more typical areas used for the procedure, this was the right choice for her.

"Across the country, the abdomen is the most common source for building a breast, followed by the thigh," Dr. Tanna said.

But her doctors decided on the unique approach, because they say breast reconstruction should not be a "one size, fits all" approach.

"We can actually really work to create an aesthetic breast that matches a patient's preference," Dr. Tanna said.

Dunn became concerned about overall implant safety after the FDA's recent recall of Allergan's textured implants, due to a risk of Breast Implant-Associated Anaplastic Large-Cell Lymphoma.

While the risk is rare, it was enough for Dunn to change her course of action. Already, at least three other women at Northwell have now booked similar surgeries for this spring.

Nine weeks after her surgery, Dunn says she is getting back to normal, and even exercising again. Her prognosis?

"Excellent," she said. "Honestly, I feel great, confident, and I'm me again."